Department of
Oncology and Hematology 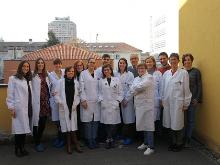 The activity of the research group headed by Prof. Antonino Neri has always been aimed at the identification and characterization of genetic lesions in B-cells and T-cells lymphoid malignancies. In particular, the group has got a world-wide recognized expertise in the field of multiple myeloma (MM) and plasma cell dyscrasia biology. A specific interest is represented by the molecular pathogenesis of MM. In that, the research laboratory has used molecular approaches to identify chromosomal translocations involving the immunoglobulin heavy chain locus that may deregulate genes likely implicated in myelomagenesis. Neri and colleagues, in 1990s, for the first time described the t(4;14)(p16.3;q32) translocation involving two putative oncogenes. More recently, with the acquisition of platforms for global genomic analysis (microarray technology and then next-generation sequencing) and bioinformatics skills, the laboratory has contributed to the characterization of transcriptome, miRNome, genome and methylome in normal and malignant plasma cells and in other lymphoproliferative disorders, mainly chronic lymphocytic leukemia. Currently, the research group is involved in the transcriptional and functional characterization of the small and long non-coding RNA fraction in myeloma. The current projects of the research group supervised by Prof. Neri are also addressed to the investigation of the functional and clinical relevance of RNA splicing dysregulation in MM, and the biological and clinical monitoring of plasma cell dyscrasias through the genotyping of circulating cell-free tumor DNA.
The laboratory has received continuous financial support from AIRC since 1989.
For a list of selected relevant or recent publications, look at pdf in this page .
Heads
Staff